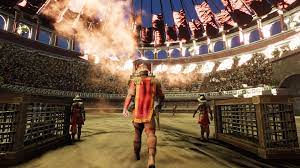 As MMOs keep increasing in popularity, CaesarVerse is one game that takes players’ interest to a whole new level. Thanks to its approach towards creating an online gaming environment that incorporates the best of MMOs, GameFi, and history, the game has a very distinct appeal.

CaesarVerse takes gaming and education hand in hand. It puts the player right in the middle of Ancient Rome, at a time when the empire was at its peak. Leveraging the open environment and historical accuracy, CaesarVerse is more than just a game. It immerses the player within Roman society and through different missions and tasks, it helps the player to get to know the real Ancient Rome.

Banking on the popularity of VR-based games, CaesarVerse will be able to recreate Rome in a 3D setting. This will, on one hand, give players a completely immersive gameplay, and for students and teachers. This lets them roam the ancient civilization and learn about it as if they were really there.

As an MMO, both gamers and history students will have hours of fun as they roam and explore the open environment, both as individuals and as cooperative teams.

Massive Multiplayer Online (MMO) games have a very specific charm. These games take RPGs and stretch the environment over an expansive world. As RPG based, these games already have a rich and in-depth structure that arises from the player taking different strategies to progress the levels.

From holding swords to plasma guns, MMO players fight, sneak around, trade, and build in different settings of fantasy and sci-fi. The cooperative play means that players can band together and work towards a common goal – something that we are very familiar with in the real world. In a nutshell, MMOs inspire us to be more social.

No wonder games like Elden Ring have created upheaval in the gaming world. Take Elden Ring as an example. Launched only this year, Elden Ring is an MMO that has sold more than 17.5 million copies. It recently pushed aside established game series like God of War and Forbidden West to win the Game of the Year award.

While the immersive and rich gaming experience is the centerpiece of CaesarVerse, it adds an element uncommon to MMOs: Play-to-Earn.

Using blockchain, CaesarVerse is able to create in-game items as NFTs. This means players will truly own their characters, equipment, and other items. The players will be able to trade these with others and even sell on different NFT marketplaces. Players, therefore, will be able to enjoy the game, learn about Ancient Rome, and at the same time, earn.

Built by a team of gaming enthusiasts who love historically accurate games, CaesarVerse is an MMO that caters to a very distinct class of gamers who feel that modern multiplayer and co-op games lack the ambiance and environment of socializing.

Become a true Roman with CaesarVerse and carpe diem!