The Elder Scrolls Online have shared an upcoming update for their Blackwood Chapter. If you love invasions and scary monsters then this should keep you entertained. An except of the official news release can be found below.

Race through the occupied city of Rockgrove and save the souls of the Ca-Uxith tribe in a new 12-player Trial, arriving soon with the upcoming Blackwood Chapter.

The ancient city of Rockgrove, located in Blackwood’s southern marshlands, has been invaded by a new Daedric cult. Taking no prisoners, they now work to complete a terrible ritual, capturing and controlling the very souls of those who stood in their way.

“The Sul-Xan tribe is a group of Naga present throughout the entire zone of Blackwood. The sect specific to Rockgrove dedicates itself to the worship of Mehrunes Dagon, and they view the city as an easy target,” explains Mike Finnigan, ESO’s Encounters Lead. “They mean to sacrifice the populace of Ca-Uxith and offer their souls to the Daedric Prince of Destruction.” 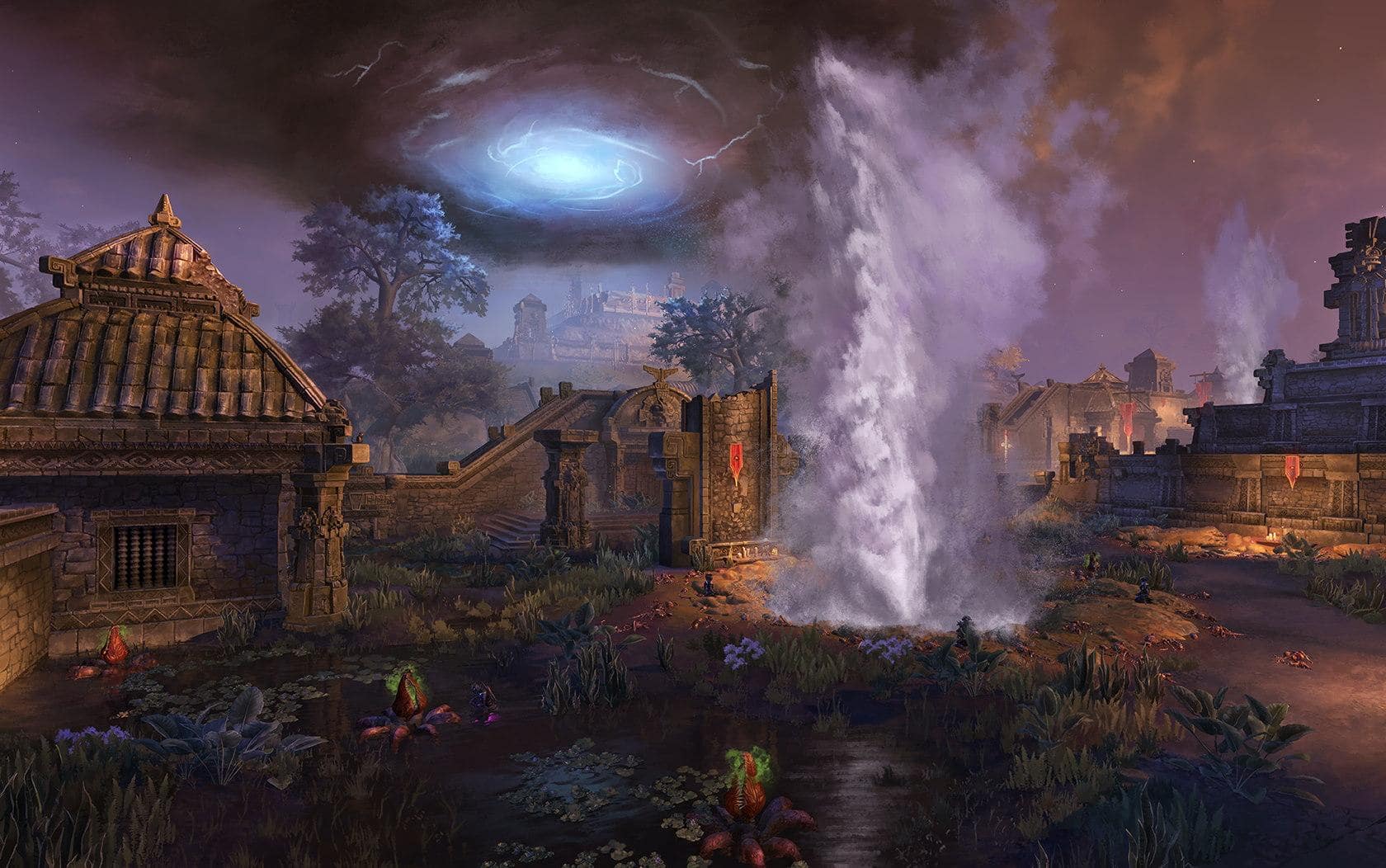 A deadly ritual over the city of Rockgrove

Rockgrove’s resident stone-talker, Dust-On-Scales, needs your help to retake the city and put a stop to the plans of the cult leader, Flame-Herald Bahsei—however, it might be too late, as the door to Oblivion may already be wide open.

As you battle your way through the city to the xanmeer pyramid at its heart, you’ll contend with the empowered cultists of the Sul-Xan. Wielding power granted to them by their Daedric Prince, the Naga raiders bring potent magic and ruthless ferocity to stop you and your party from disrupting their ritual. 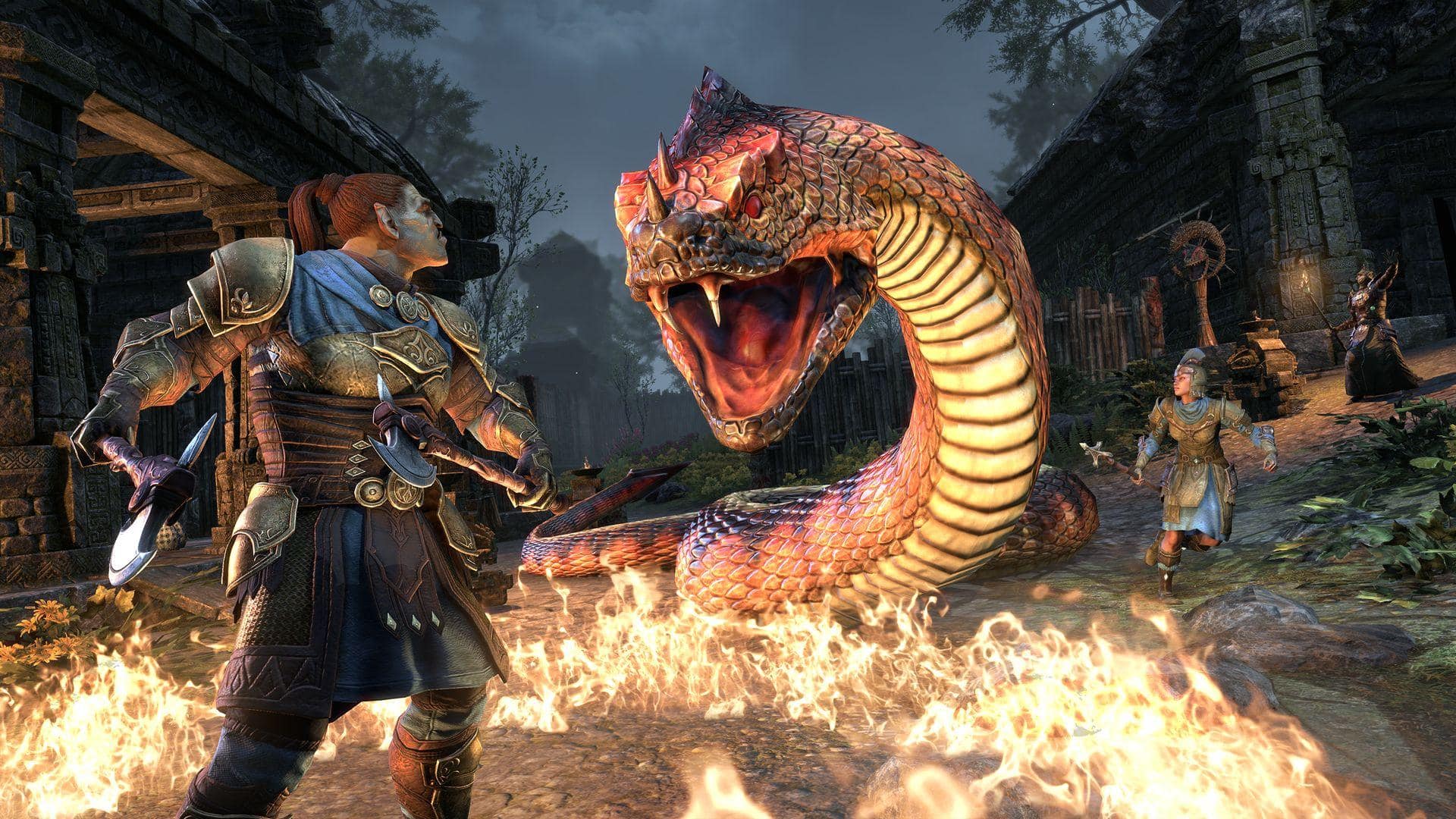 “The cult’s dedication to Mehrunes Dagon has borne fruit, and they have been infused with his destructive influence,” explains Finnigan. “These powerful followers typically carry a banner that shows their devotion, allowing allies and enemies alike to know their allegiance to Dagon.”

In addition to empowering the cultists, Mehrunes Dagon sent Havocrels to aid them in battle. First seen as the Cauldron’s final boss, Baron Zaudrus, these powerful Daedra challenge you and your allies with even more formidable abilities. 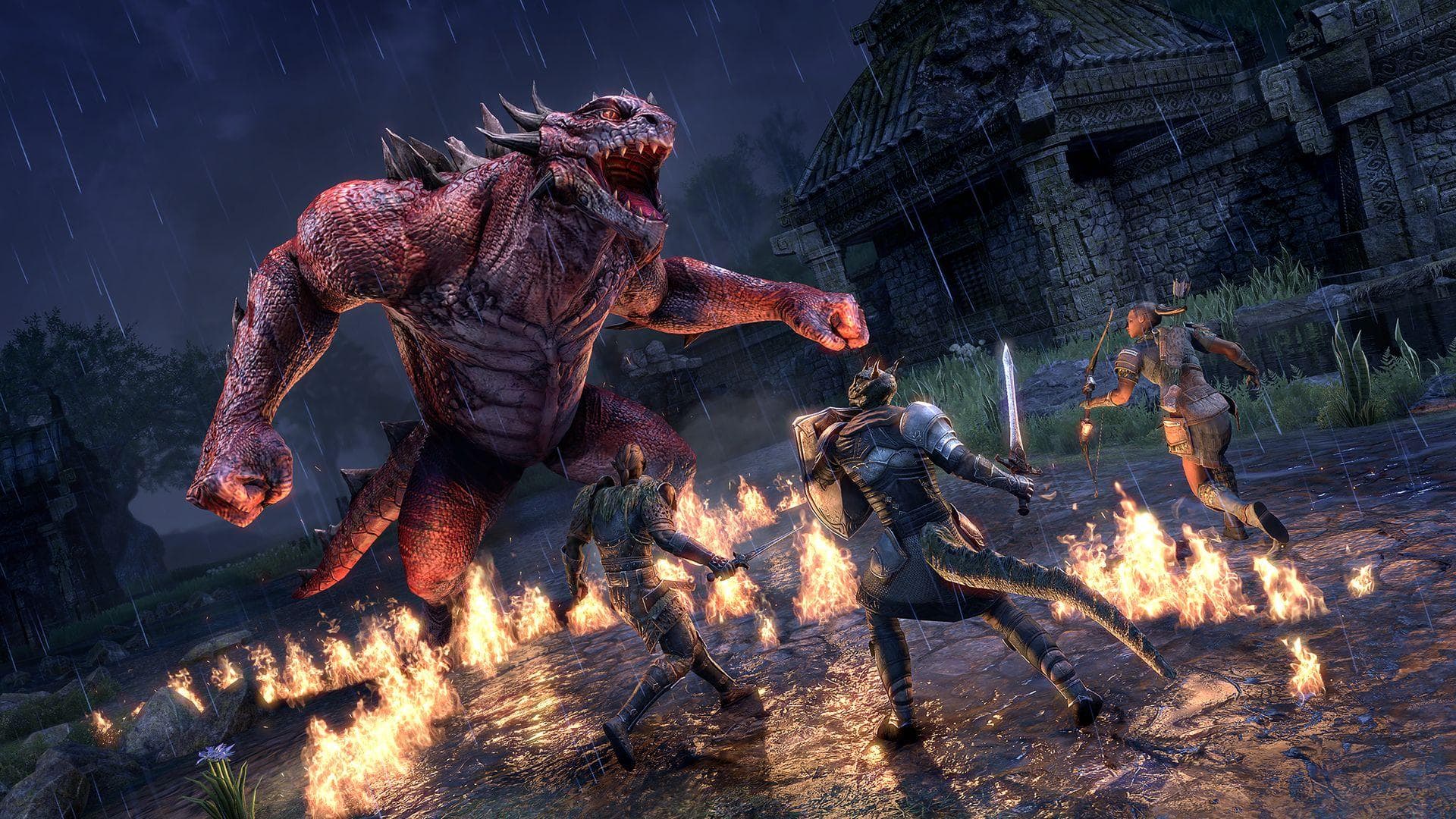 Of course, in addition to these subordinates, you must also face new bosses, too, each with their own unique mechanics and challenges. For example, the hulking Oaxiltso makes use of Havocrel allies and noxious sludge, while Flame-Herald Bahsei summons an army to stop you. Finally the Trial’s ultimate boss encounter doesn’t even take place on Nirn.

“Xalvakka is a general in Dagon’s army who leads from her tower in the Deadlands,” explains Finnigan. “You need to enter the plane of Mehrunes Dagon himself to take the fight to her.”

Battle your way to free the souls of the Ca-Uxith and you’ll earn unique Trial-specific item sets (four in total), Achievements, and collectibles not found anywhere else in Blackwood or Tamriel. These include the Stone-Talker’s Oath set, which allows your fully charged heavy attacks to place a bomb on your enemy that, after 10 seconds, explodes to restore Magicka and Stamina to your teammates. 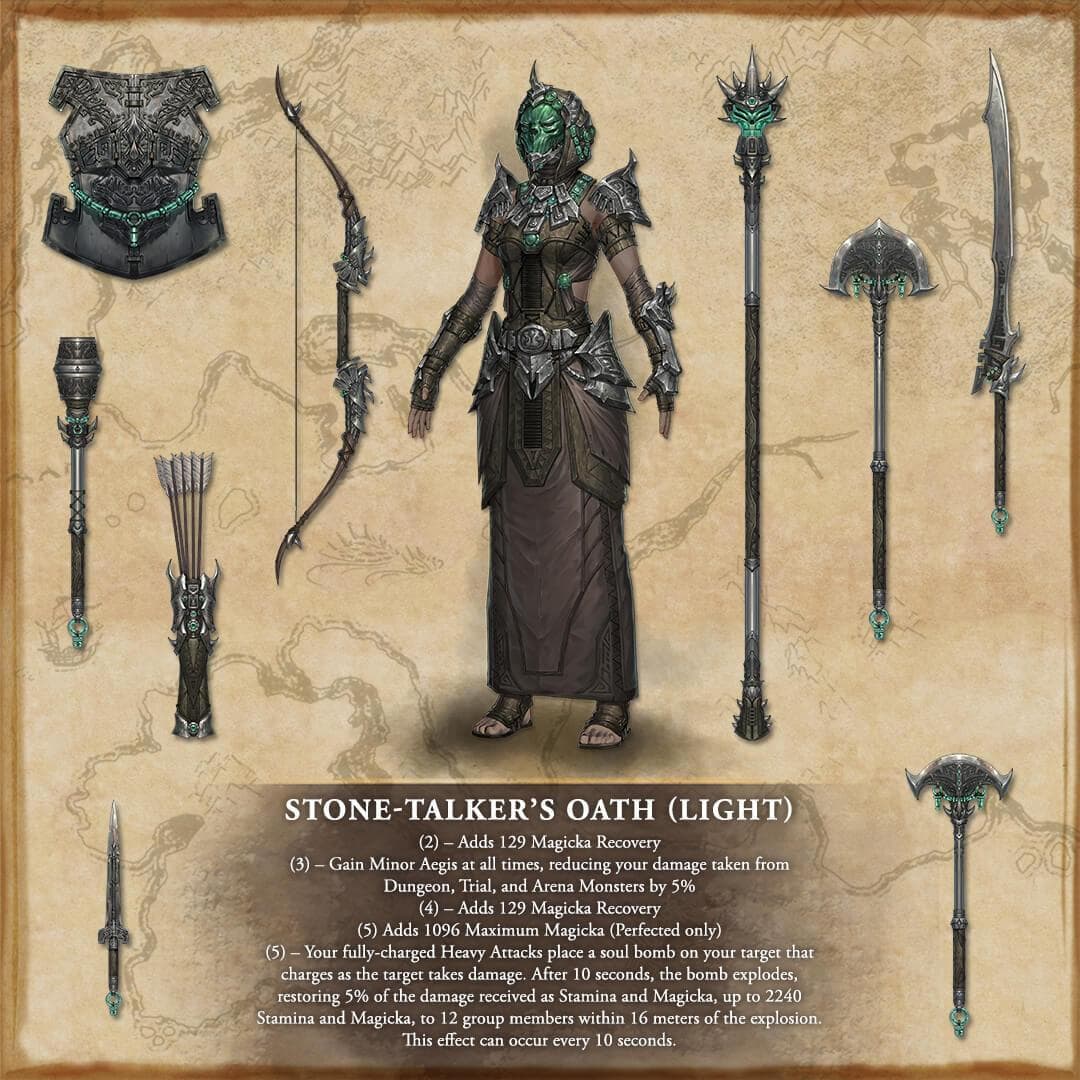 In addition to the item sets, you can earn some incredible new collectibles by completing the Trial’s Achievements, too, including the Sul-Xan Raider Markings (face and body) and the red-hot Sul-Xan Fleshripper mount. 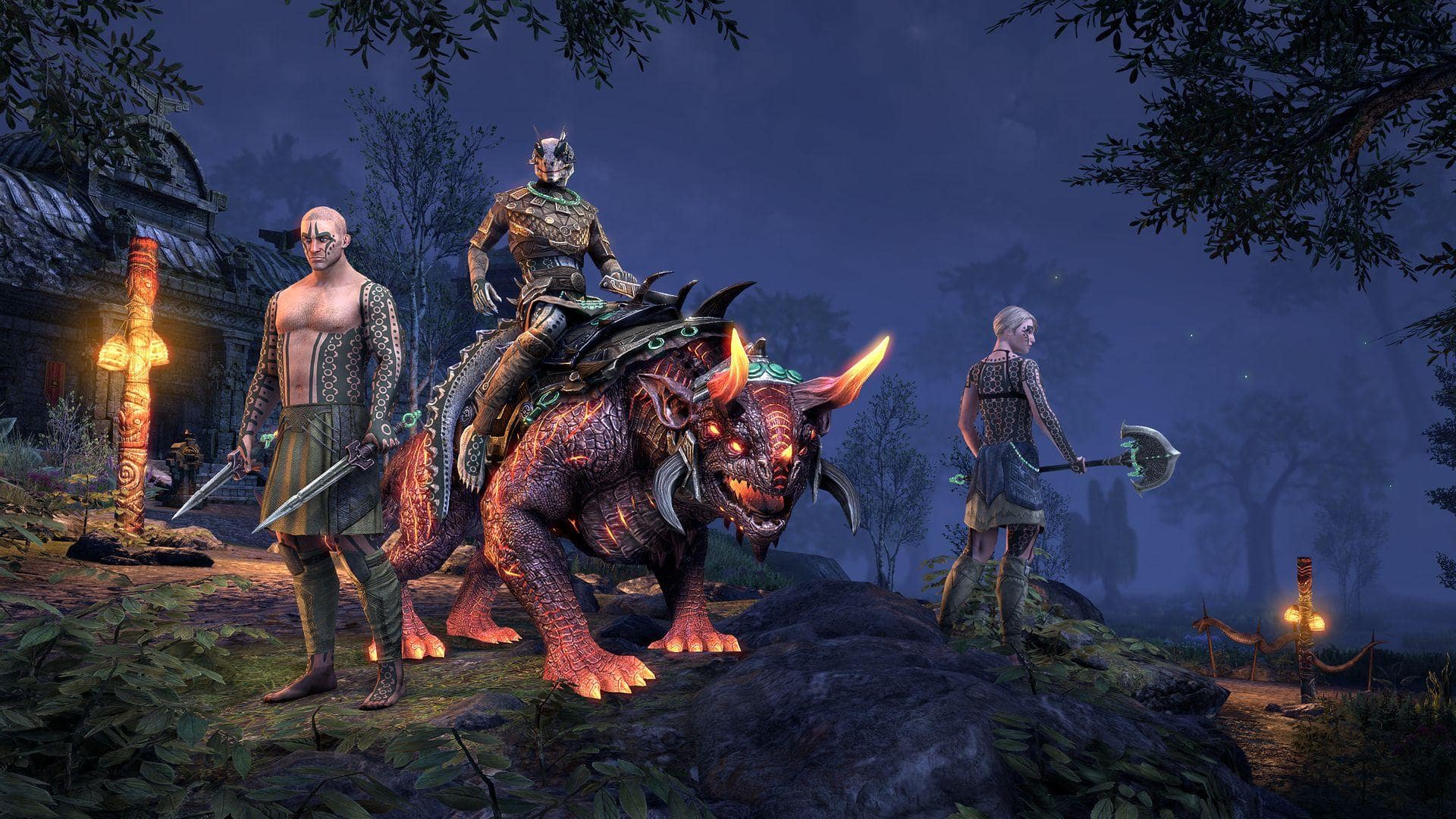 “Without a doubt the most prestigious award in the Trial is the Sul-Xan Fleshripper mount,” says Finnigan. “This beast is a Daedra of epic proportions and you only get this from doing the hardest of hardest achievements.”

Part of the upcoming Blackwood Chapter, this 12-player PvE experience is available in Normal, Veteran, and Hard Mode difficulties, ensuring that Rockgrove truly challenges you and your team. Maniacal cultists, Daedric monsters, and one of the Prince of Destruction’s most-trusted generals stand between you and the souls of the Ca-Uxith—Oblivion awaits! Are you and your team ready to fight back against the Sul-Xan? Let us know via Twitter, Instagram, and Facebook.

The Elder Scrolls Online: Blackwood arrives on PC/Mac and Stadia on June 1, and on Xbox One, Xbox Series X|S, PlayStation 4, and PlayStation 5 on June 8. Pre-purchase Blackwood now to receive unique bonus rewards and gain immediate access to the Nagahide Welwa Ravager mount. Don’t miss out!