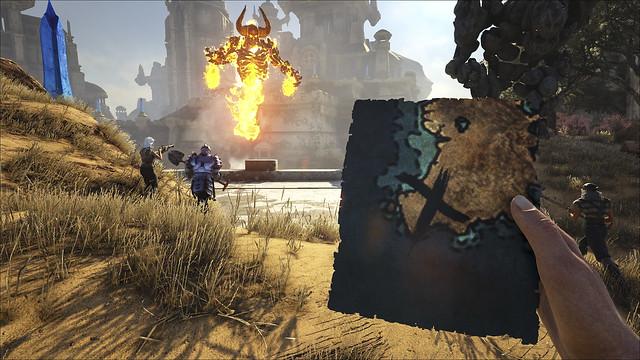 The bizarre piracy sandbox MMO Atlas takes another huge stride on the road to weirdness — and hopefully, more stability as well. A few days ago, developers Grapeshot Games released the second update for this early-access MMO. This patch has been long in the making, and it was previously available only on their public test realm. But now that it has been fully finished and released, we can surmise that this content patch doesn’t have a consistent theme, except for ‘cool stuff’; in every meaning of the word. On the one hand, the patch implemented cool new weapons like torpedo launchers. But on the other, you also get things like a Polar Ice Dungeon, where you can do battle against an evil snowman.

Apart from new animals, weapons, and boss fights, this patch also adds brand new islands to areas near the poles and the equator. As we’ve mentioned above, this patch fully embraces the strange direction that the game has been taking; leaning more heavily into the realm of fantasy. As such, this update gives you the chance to encounter new creatures like the Olfend — something akin to a crossbreed of a camel and an elephant. There is also the Giant Tortugar, a huge animal that has the characteristics of a turtle and a dinosaur. And no, we are definitely not making this up, and it only gets weirder from here. This being has a side-panel that slides open, and players can actually get inside and ride the turtle underwater. Indeed, this jumble of a game offers absolutely everything, from dinosaur creatures to evil snowmen. We wouldn’t be surprised if the game offered you a pirate casino and called on you to beat the slots two updates down the line.

Although it may seem that the devs were just adding stuff they deemed as fun just for the sake of it; they’re actually doing their best to improve the game’s shortcomings. For example, the Polar Ice Dungeon is there to fill the noticeable lack of endgame content Atlas was struggling with. This is an environment only available to players who have unlocked nine power stones scattered throughout the world; which basically means you have to go through all of the other content before battling the abominable snowman inside.

Speaking of battles, you’ll be glad to hear that this update entails a few fun new weapons. Higher-level players will have the option of adding torpedoes to their ships, along with huge harpoons for boarding and specialized gear for fishing.

We should mention that even though the game has been going deeper into fantasy territory with its two updates, the latest one also brings a lot of small improvements and bug-fixes. Curiously, the devs make no mention of any performance improvements. And that’s something this game sorely requires. Let’s just say that dinosaur-esque creatures aren’t the only thing that the game shares with ARK: Survival Evolved. Much like this open-world game, it also has significant performance issues, even on high-end machines. And unfortunately enough, it seems that the devs did nothing on that front in the latest update.

The previous update to this epic swashbuckling MMO was also much more focused on content; which would be fine enough, if Grapeshot Games showed any promise of actually fixing underlying performance issues. Though, seeing as the game is heavily based on Ark: Survival Evolved, that may be a problem they simply can’t solve.

But what was Atlas in the first place? In short, this is a pirate-themed MMO which allows you to create your own pirate and terrorize the seven seas. Or at least mildly inconvenience them. Even before the MMO took a turn for the strange with its major updates, it was already quirky, to begin with. The character creator allows you to choose ‘liver transplant waiting list’ as a skin color; which is basically all the information you’ll ever need about any game, ever.

The game’s wacky aesthetic is coupled with a curiously focused penchant for realism. So, in one game, you simultaneously have to stab a Kraken and watch out for your vitamin levels by following a balanced diet. It sounds strange, but it’s extremely fun. Imagine struggling to obtain Vitamin D through fish, because you need special skills to catch them; while you’re looking for the fountain of youth at the same time.

Indeed, the survival aspect of the game is extremely prominent, so it’s less Pirates of the Caribbean and more Lord of the Flies. So, if you were imagining going through the adventures of Jack Sparrow, there will be something in that vein, but only as long as you’ve eaten enough protein.

As you’d expect from an open-world MMO, there’s also quite a developed crafting system involved, which you’ll need to utilize for constructing everything from trousers to ships. And once you do have a ship, don’t get too excited. Actually sailing it will be a difficult experience before you hire yourself a crew. When you hire more fellow pirates, you’ll be able to simply control the speed of the ship from the wheel. But before that, you actually have to physically walk around the boat, and tinker with the masts. While that juggling gets tiresome pretty quickly, once you get the hang of it it’s a pretty rewarding experience.

All in all, the game is a fun, but pretty incoherent experience. And that hasn’t changed with either of its major updates. While the MMO is both intriguing and pleasing in terms of graphics, it’s deeply riddled with bugs, even now. However, if the devs decide to work on the performance and numerous technical difficulties; this could prove to be one of the most original MMOs in recent years. Much like the ocean it wants to portray, as of now — Atlas is tantalizingly interesting. But as you keep playing, you may notice horrors waiting for you beneath the surface.