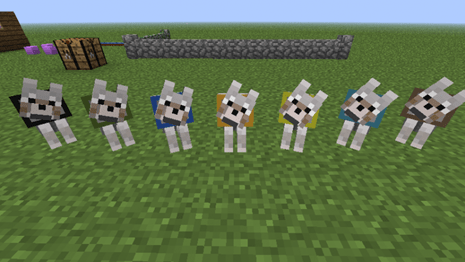 Minecraft has a variety of creatures that you can tame. One of such animals is a wolf. You can find more about a wolf and other creatures on https://skins4minecraft.com/. There are three types of wolves, depending on how the player interacts with them. There is a wild or untamed wolf, a hostile and tame wolf.

Wolves hunt rabbits, skeletons and sheep. In this case, animals begin to escape from the predator. The exception is the killer rabbits who attack the wolves. Wolves can revenge if they are hit by a mob or player. Lamas, who are used to transport things, hate wolves.

Wild wolves have white fur, lowered tail. They are neutral characters. If the wolf is interested, then he bows his head, showing interest in the meat or bones that the player holds. If the initiator of the attack is a player, then the animal will become aggressive towards him.

Enemy wolves constantly roar, they have a straight tail and red eyes. The fur gradually becomes contrasted, revealing dark spots. The mouth opens with a roar. Usually, they attack players who wound the wild wolf and don’t retreat until the player dies. Enemy wolves attack everything they see.

Tamed wolves, or dogs, are different from hostile and wild wolves.  They don’t become evil on their masters, however, they can be aggressive to other players and mobs. The wolves have other eyes, look good-natured and wear a red collar. A collar can be painted in any color.

If you right-click on a wolf, then it will sit and stay in place, while the player can move freely. The wolves that are sitting, don’t disappear, even if the player leaves the game or goes to the sleep mode.  They attack everyone who attacks the player. The exception is the creeper. The creeper is a green mob-kamikaze. When approaching the player, he begins to spit and explodes in 1.5 seconds. Also, the wolf won’t attack the tired horses. Tamed wolves have their tail raised upward, and the wild one’s tail is lowered downwards. Lamas don’t touch tamed wolves.

Tamed wolves follow the player while he’s moving. If the player is standing, the wolf will circle around the player. Also, the wolf is able to teleport. This helps to overcome obstacles such as lava, water and pit. However, the wolf won’t teleport with the player if it is in water at a depth is bigger than one block.

If the wolf is seated, tied with a cord, or it’s in different worlds with the player, then the wolf won’t be teleported. Wolves can teleport into opaque blocks. That’s why, it is not recommended to go with them in the dungeons, near fire or lava.

The tame wolf has its advantages. It is 5 times more durable than a wild wolf, has 2.5 times healthier and a double attack power. The wolf can be tamed by feeding it with bones. The wolf that has become tamed doesn’t eat bones anymore. The number of bones to tame the wolf can be different.  The wolf is precisely tamed for 12 feeds. There is no limited number of tamed wolves. If you want, you can create a wolf pack. 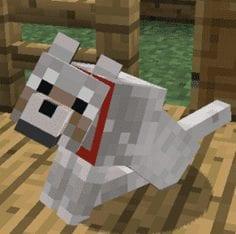 The wolf’s tail reflects health status. It can rise or fall. If the health of the tamed wolf falls, then it can be restored with the help of meat and fish. Puppies can’t get 100% health, but their maximum is the same as the player has. The health of puppies can be restored by feeding them. You can also use special herbs for regeneration or rapid treatment. The wolf can’t poison, so it can eat rotten flesh or chicken. If you want to impose an invisible effect on a wolf, it is worth remembering that the collar won’t disappear.

Tamed wolves can be bred, but only if they are healthy. In this way, you can replenish your flock. To accelerate the growth of a puppy, it needs to be fed with meat. Each use of the puppies takes 10% of the maturity. Puppies behave similarly to adult wolves, except for attacks and swimming. They can’t do this because they are too small.

Tamed wolf won’t obey the player if he enters the game under a different name. Because the wolves have the “Owner” tag with the name of the player who tamed it.

If an aggressive wolf is given meat, then the hearts will be emitted.  But he won’t become tamed and will continue to attack. It is impossible to hide from the aggressive wolves with the help of invisible poison.