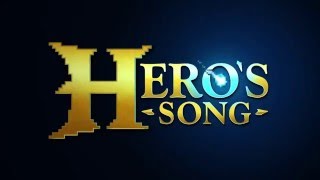 John Smedley and team have announced that the KickStarter initiative to fund Hero’s Song has been cancelled. The reason being, the team realized that the trend in acquiring nearly $800,000 to complete Hero’s Song was too low and that the goal was not going to be met.

After looking at our funding levels and the reality that we aren’t going to reach our funding goals, we’ve decided that the best thing to do is to end the Kickstarter. We sincerely appreciate all of the support we got from the backers and the Kickstarter community. This was our first Kickstarter and we made mistakes along the way. I want to acknowledge that right up front. We put a lot of time and effort into the Kickstarter, but it’s obvious missing things like physical goods hampered our efforts. It’s also fair to say because we’re early that we didn’t have enough gameplay to show the game off enough to get people over the hump.

So where do we go from here? Well the good news is that our Investors are backing us all the way and we’re going to get Hero’s Song done exactly when we said we would. I’m also happy to say that we’ve been able to do this without having to take money from publishers, something that was of key importance to us so that we could remain in creative control.

We’ll be updating you all along the way.. holding development streams (on Cohhcarnage’s stream on Twitch) and being completely transparent with our development process. You’ll be hearing from us all the time and we’ll be updating our website and all of you on a constant basis as we have cool stuff to show.

Thanks again for all the support you’ve shown, and thanks for the constructive criticism as well. We took that to heart and we’ve learned a lot from it.

Kickstarter remains an incredible source of both goodwill and community support, and we’ll never forget the kindness our backers showed us.

Thanks and we’ll see you soon!

Smed and the Pixelmage Games Team.