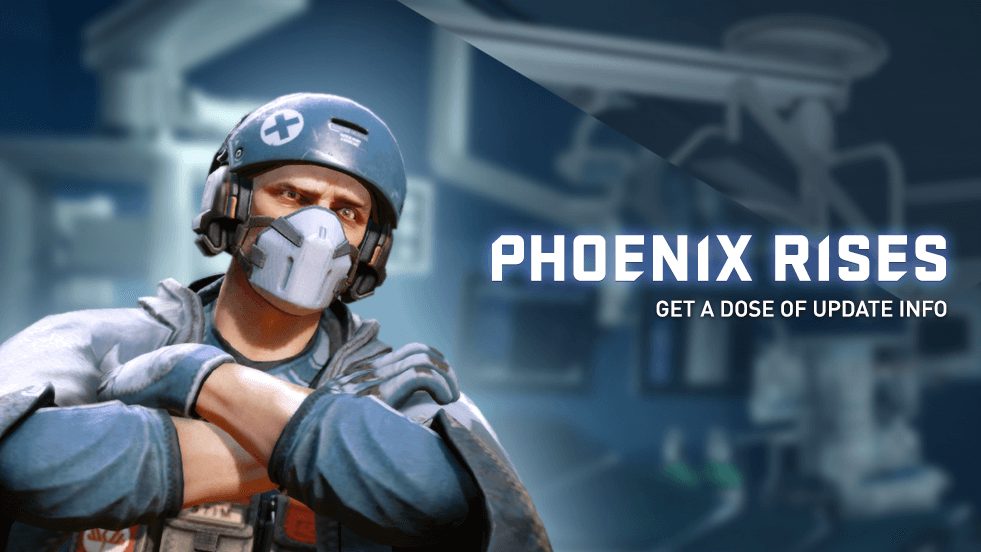 Dirty Bomb’s fourth medic has arrived to heal the sick and shred the healthy, and he’s bringing along a whole bunch of new features as well. Check it all out the update below!

Phoenix is a Doctor. A healer. A saver of lives. An arrogant bastard who broke his Hippocratic Oath ten minutes into his first surgery and thought self-replicating nanomachines would be an exceptional instrument for face-lifts and nose-jobs. After the Spanish medical community banished him for ethical violations bordering on mad science, Phoenix has risen again, finding his way to London to see what his special little friends can do on the battlefield.

His prototype nanites mend the wounds of himself and his nearby allies, and trigger the ability that lends him his name. More offensive-minded than Aura and Sparks, Phoenix heals his teammates by being right in the thick of things.

Phoenix can trigger his experimental nanites to spread to nearby allies, instantly mending their wounds, and his own as well. The longer he spends charging the ability with the Q key (default), the more health the Healing Pulse restores, triggering an increased cooldown. But that’s not all the nanites do…
Ability: Self-Revive

The problem with needing to be near the people getting shot is that Phoenix can become something of a target himself. Luckily, those helpful nanites can revive him once downed, fully restoring his health. It takes a few seconds to trigger, so make sure that the enemy isn’t closing in to finish the job.
Ability: Defibrillators

Just like Aura and Sawbonez, Phoenix can also revive incapacitated allies with Defibrillators, bringing them back into the fight and restoring health based on how long the paddles have charged.
Loadout Cards

Phoenix’s SMG’s and Semi-Auto Pistols are effective close-to-medium-range workhorses. He has a full array of Loadout Cards, featuring Augments and other Weapons that let him hold his own in battle.

Phoenix’s messiah complex extends to his new ‘workplace’, along with his need to claim his share of the spotlight; introducing the new “Health Insurance” XP Reward!

After healing or reviving a friendly player, you’ll be rewarded with an XP bonus based on the XP your patient earns for the 10 seconds after being revived, which applies to all medics that put themselves in the line of fire for their teammates.

While we’re keeping it as up-to-date as possible, our new anti-cheat system NGS is only one layer of protection. To support NGS, we are adding in the much-requested Player Reporting system. Accessible by right-clicking on another player’s name in the scoreboard, doing so will send a report to our team.

Due to the high impact of this system, Player Reporting is being released in an Alpha state. While we will be punishing guilty players in submitted reports as soon as possible, we do ask that you remain patient as we gather data and tweak the system’s parameters.

We’ve improved the rules in Stopwatch Mode, properly rewarding teams who progress through the objectives the furthest. A few edge case situations are now accounted for, including the allowance of draws where appropriate.

Want to set up scrims with friends to practice strats, or defend your team’s honor against your rivals? The new Private Matches feature lets you organize your own match, invite members of your Steam Friends list, select whichever Map and Game Mode you want, and more!

We’re releasing Private Matches in Alpha in order to better test the systems involved, as all matches played through Private Matches will still be on our dedicated servers. If you have any feedback, or encounter any problems, please let us know on the official Dirty Bomb Forums.

Private Matches will give you the option to test our new Friendly Fire setting. No standing in Airstrike territory or sending an Orbital Laser careening over the map willy nilly, your teammates will take damage from almost every source. Even more, allied players will have full collision with you, preventing you from running through them and their deployables.

We’re also trialing a punishment system for players abusing the Friendly Fire rules. When you are killed by one of your teammates, you will be prompted to sound off on the death:

Let us know how you get on with Friendly Fire, as we expect to tweak it based on your feedback!