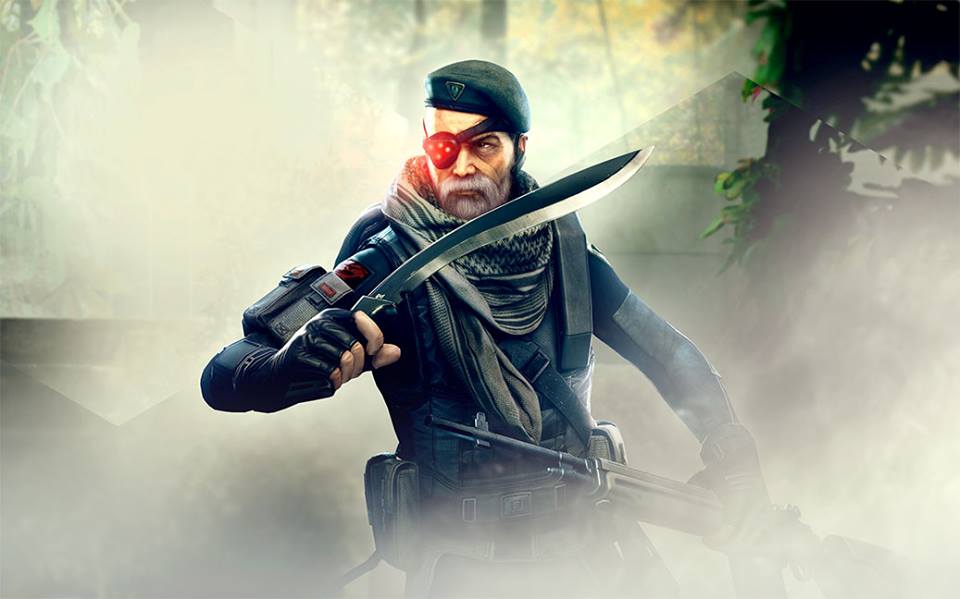 Redeye is the latest addition to Dirty Bomb’s roster of killer Mercs.

The dossier on Redeye’s lengthy service in the Australian SAS is a thick one. Time after time he earned field promotions for outstanding bravery, until being busted back down to Trooper for insubordination, or refusal to follow orders, or both. By the time of his discharge for “knowing too much about everyone in the regiment”, he had an average rank of corporal, but no pension. Now that he’s taken to the private sector he’s his own boss for a change. Too bad his sole employee is a total buffoon who hates his waste-of-space boss.

Redeye is a mid to long-range specialist, with team-playing abilities that can seriously hinder the enemy’s ability to attack and defend, and make his own team more efficient in battle as well.

Redeye’s Smoke Grenade is the pinnacle of non-lethal battlefield control, pure elegance in simplicity. When thrown, it creates a large cloud of smoke, completely blocking vision in the area. While anyone can walk through it, they’ll have no idea what violent end awaits them on the other side.

While the cloud of smoke will slowly dissipate over time, there’s another way to get rid of it beyond waiting patiently. Explosive damage in the area of the smoke cloud will disperse it, clearing the way and restoring the sight lines on your terms. And you’ll want to take care of it quickly, because there’s only one way to see through the smoke…

By activating his IR Goggles, Redeye can see the world based on the heat given off by objects Mercs, lighting them up easily against their surroundings. Better yet, any enemies near the center of Redeye’s vision will be Spotted, including invisible Phantoms. Spotted Mercs will have their location displayed on the HUD of all of Redeye’s allies, just like if they were seen by Vassili’s Heartbeat Sensor, making them easy pickings for your team.

What makes this ability truly lethal is that, while normal sight is completely blocked by a Smoke Grenade’s cloud, Redeye’s IR Goggles work just fine. This allows Redeye to peer through the cloud, spotting anyone standing out in the open and letting all of his allies know exactly where they need to shoot.

More details and patch notes on the Dirty Bomb website.