Home News Hundreds of Thousands Banned From World of Warcraft

Blizzard has been cleaning up shop and has confirmed another recent ban wave. The official announcement reads:

We’ve recently taken action against a large number of World of Warcraft accounts that were found to be using third-party programs that automate gameplay, known as “bots.” We’re committed to providing an equal and fair playing field for everyone in World of Warcraft, and will continue to take action against those found in violation of our Terms of Use. Cheating of any form will not be tolerated.

If you believe that you’ve encountered a player abusing a bot, exploit, or cheat, please let us know! You can do so by using the right-click report functionality in the game, and/or by emailing information to hacks@blizzard.com.

While the exact number of banned accounts has not be revealed, there is a screenshot suggesting that over one hundred thousand accounts had been banned for six months. 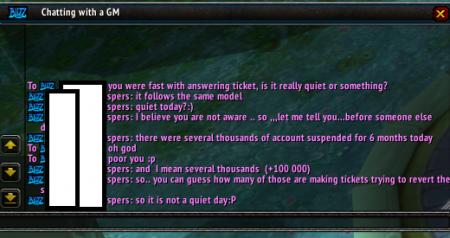 What is your opinion of the recent bans? Official announcement.