Champion Mastery is a new concept due to be beta tested on Riot’s PBE servers. Basically it’s a way to show progress and eventual mastery over each champion that you play. Ultimately your teams performance and your own will gain you mastery points that add up over time, taking you through a possible five tiers, with the top two giving a loading screen badge, a custom emote, and an announcement banner.

We’re kicking off the rollout with a PBE stint from 3/11. If all goes well, a couple of weeks later we’ll then launch a beta in a single region, focusing on Summoner’s Rift normal queues to make sure the feature’s stable for expanded use. We’ll read through your feedback and keep you updated with our progress, too, so keep an eye out for future posts after the service goes live!~ Riot 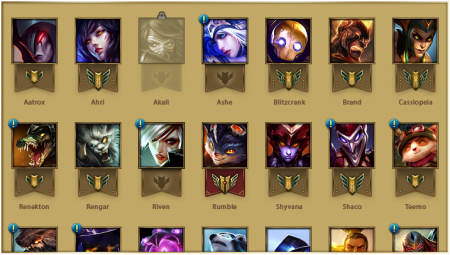 Patch 5.5 is also on the horizon, bringing with it the usual champion tweaks and balancing acts. Later in the patch the new champion Bard will also be released. There’s plenty of jungle balancing this patch so head on over to the full official patch notes.