Home News The Revival of Call of Combat! 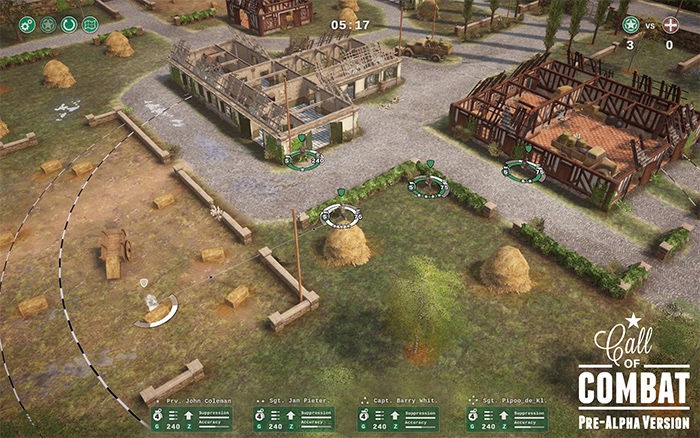 KAVA Game Studio is working hard on the revival of their cult hit Call of Combat, a multiplayer real-time strategy game set in WW2. They need the community’s help to finish this grand project, and therefore kicked-off a Kickstarter Campaign today.

I don’t always get excited about kickstarters but this one I had to check out right away. Call of Combat is a great real time multiplayer arena strategy game with character levelling and a great chain of command system. Teams that work together always do much better. Back when I first played it was called Chain of Command and throught the years it’s been a brilliant game, just one of those great games that gets lost with time.

Now it’s getting a much needed visual upgrade amongst other things, so check it out!

The prequel of Call of Combat was developed in 2002 by the student Florian Käding as a private project. The game was a multiplayer squad-based real-time strategy game set in the Second World War. It soon attracted a large community of dedicated players that kept the game alive for almost 10 years. The support needed to keep Call of Combat running on ever more modern systems proved to be an uphill battle and after 10 years it was decided to create a more contemporary version of Call of Combat.

Now KAVA needs the help of the Call of Combat community, fans, friends and family in order to finalize their game. They have a 30 day Kickstarter Campaign starting today and ends on the 20th of March. During the Kickstarter campaign, KAVA will be hosting a Leaderboard Competition with their Kickstarter demo for everyone who has pledged, in which achievements can be won. With the community’s support, they wish to;

1. Create a full-blown leveling system based on real military ranks
2. Add an elaborate chain of command structure in-game that encourages teamplay
3. A strategic map with a battle planning feature
4. Include a team-mate communication system based on easy to use shout-outs and pings
5. Add the ability to trade and loot weapons, which enables you to pick up weapons from the dead
6. And many more..

Call of Combat is a multiplayer real-time strategy game, where forming well thought-out battle plans and carrying them out cooperatively are the keys to success. Each player commands a squad of 4 soldiers through the typical battlefields of WW2. Players can play against each other in a 1 vs 1 battle, or team up with others to fight battles on an epic scale. In such larger battles, the highest ranking player of each side has the role of coordinating the team’s actions through a special leader interface which also serves as a tactical overview of the situation. It is through the team leader’s strategic guidance that players can achieve victory!

Features
Call of Combat has the following key features;

1. Real-time strategy game; intense battles where tactical cunning and teamwork are just two of several key skills a player must master in order to be victorious
2. Multiplayer game; team up with other players and form effective chains of command where the leader coordinates the team’s overall strategy
3. Squad-based tactics: assemble a squad of up to 4 soldiers, take command of them in thrilling close quarter combat, and bring them home alive.
4 .Fight in typical World War 2 terrain; enter buildings for cover, set up effective ambushes and use the terrain against your opponents.
5. Clan-based competition:  join an active, loyal and competitive community that has been around since the start of Call of Combat  over 12 years ago.

Here’s a look at some early gameplay footage.