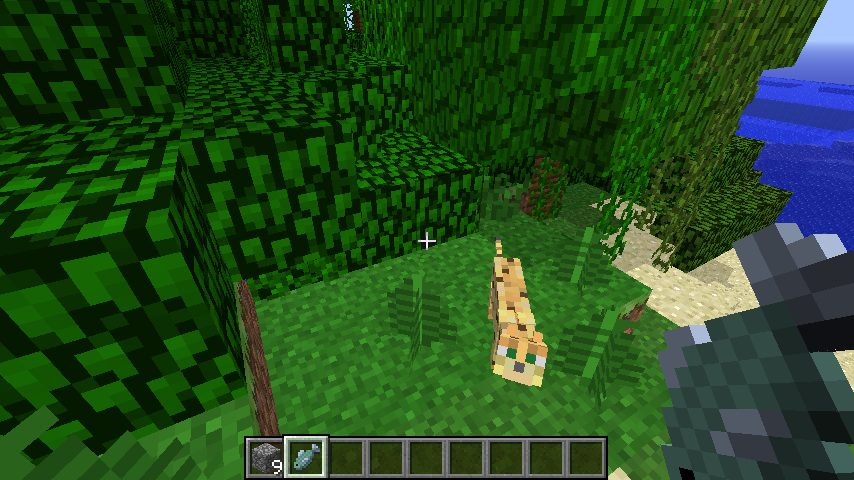 The official update for Minecraft happened on March 1st, and then a further 1.2.3 update happened on March 2nd. This was to fix up bugs like lighting and blocks not being able to be placed on snow, and mobs spinning around while chasing down players.

While exploring the RaGECRAFT temporary 1.2.3 server I found a new jungle biome, and I have to say it was fantastic. The huge 2×2 trees are awesome. What makes them so great are the branches come off from the main tree, but them together with the scrub at the bottom, and the vines everywhere defiantly make this an exciting new biome. I can see tree-houses on the ‘need to build’ list of many players.

After a quick look around the biome, I quickly set out to find myself a little ocelot! After I found one got myself some raw fish, and set out to tame one. It turned out to be quite hard, even the smallest sudden movement made them sprint off. I had to crouch, and move the mouse very slowly until I was about to give it raw fish.

After I had actually managed to give it some raw fish without it running off like a chicken, it turned into my new pretty kitty cat! I called him Jerry.

Myself and Aksel set out to build a little house for Villagers, as we couldn’t be bothered to find a village. They are so rare are we are just plain lazy. As the server was set to hardcore mode, we wanted to test out Zombie invasions and Iron Golems.

We did make the house a little wrong, as Iron Golems didnt spawn at all, but we managed to get a Zombie Invasion going on! I do feel sorry for the villagers as everything seems to attack them!

The extended world height really does open up the opportunities of building. I never really realised how much more space there really is until I built a tower to the limit.

RaGECRAFT will be updated later on today, and you will be able to build in this new awesome world!