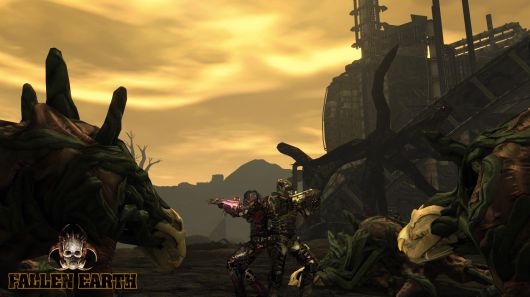 Below is an article written by Massively (find the original here) about the new Alpha County expansion for Fallen Earth.

Welcome to Alpha County, wasteland wanderers! That’s right, the big day is here, as GamersFirst has finally launched (see below) the newest expansion to Fallen Earth. What does this new addition bring to Fallen Earth players? Well… (deep breath!) the largest addition is the eponymous Alpha County zone, which provides endgame-level players with a wealth of new content. The expansion brings the level cap to 55 and introduces a brand-new conflict town called Blockade. Also included are new areas known as Progress Towns. These towns are PvP-centric areas that players can fight over, command, defend, and hopefully, hold.

The expansion also brings a wealth of combat balance changes and new skill lines. The new system “allows for wider varieties of player builds and roles in combat.” In addition, skills will no longer increase alongside the character’s base statistics, thereby requiring more specialized skill investment in order to receive the most powerful abilities. New players aren’t getting left in the dust either, as they will now begin the game with 30 Advancement Points from the get-go, allowing them to take steps toward customizing and defining their characters much earlier in the game. For more information, and to jump into the post-apocalyptic wasteland of Fallen Earth for yourself, head on over to the game’s official site.

[Update: And it’s just been announced that the Alpha County update is delayed until tomorrow. So there’s that.]