Elite Dangerous has been out since 16th December, 2014. Has much changed in the two years of its official release? The short answer is yes, currently the game has two versions, the base game, and Horizons released on 15th December 2015.  Horizons was marketed as a yearlong season pass. Currently Elite is up to version 1.7 and Horizons is 2.2. Each major patch has been designed to add to both the season pass as well as include key features for all players. Currently season 3 has not been given a release window. The game now has 32 playable ships with new ones being slowly being added to the mix. Other features added since the start include planetary landing and exploration with new alien archaeology.  New spaceport layouts have been added allowing you to have a visual idea of what the station is about but this is more of a cosmetic upgrade.

The Galaxy is starting to expand its “landable” bubble. By landable I mean you can go dock and buy/sell or receive missions from.  Despite being able to travel to every location within our galaxy, space is big and mostly unpopulated.  This has led to a lot of exploration of star systems, but officially only around 4% of the systems have been visited. A much smaller number of systems include dockable locations.  Community action has been allowed to shape this part of the game, and a second habited bubble of docking locations has become active.  As more community goals are reached, some locations grow and expand, while some fade away. 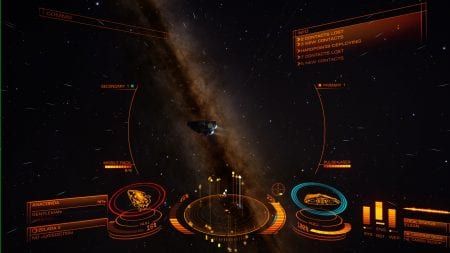 Crafting is slowly being integrated into the game, with the initial version being way too hard to complete and did in fact add a grind to the game for some resources. Later they removed some of the requirements making it too easy, but the balance seems to be getting better and despite the crafting of improved ship upgrades including weapons and shields, even the base game can collect the materials so that when you do get Horizons you do not have to start from the beginning on collection items. Recently they have added defensive fighters for the larger ships, effectively turning some ships into space-aircraft carriers.  The initial introduction to this has been quite smooth from my experience.

The game itself is always growing. Despite not having a subscription system, they have continued to improve the game itself. Cosmetic upgrades to the ships are optional; their small cost helps subsidize against subscriptions needing to be added. A lot of players that give up on the game have gotten lost in the grinding trap, that other games have installed in our minds as the only way to play.  Elite is not a 100 metre dash, it plays more like a marathon, allowing players to progress at their own rate, setting goals for themselves be it to help an Independent group such as the Ant Hill Mob chance to grow and expand or maybe help the Empire crush all in its path.  The main issue with this game is its too open-ended for some players.  You start with a ship and optional missions, with no goals beside those you set for yourself.  People I know become bored of flying from point A to B dropping off fruit and veg to make a profit.  To be fair if you want to be an interstellar Fruit and Veg man, all the power to you, but being a merc might be more fun if you are more into that.

The game has evolved as time has gone on, and despite some of the community not understanding the idea of a truly open space game, it has continued to improve.