The Call of Combat team have something interesting in the works for you: their new leveling system! This leveling system is focused primarily on promoting positive gameplay behaviours and skillful techniques; this is aimed at promoting team synergy and rewarding you for vanquishing your enemies.

It’s still a work in progress but the main focus is the following:

With this in they have set off to design a robust system, that is slightly different from the leveling systems most people are used to. Yes, that means it is not just KD ratio that matters! The system is designed with player skill in mind (rather than playtime, as most games do) as we they to encourage an inherent competitive atmosphere. Using levels as a rough reflection of a players skill allows for better synergy with the competitive recruitment of regiments.

A rough illustration of the leveling system, based on the Second World War US army ranks: 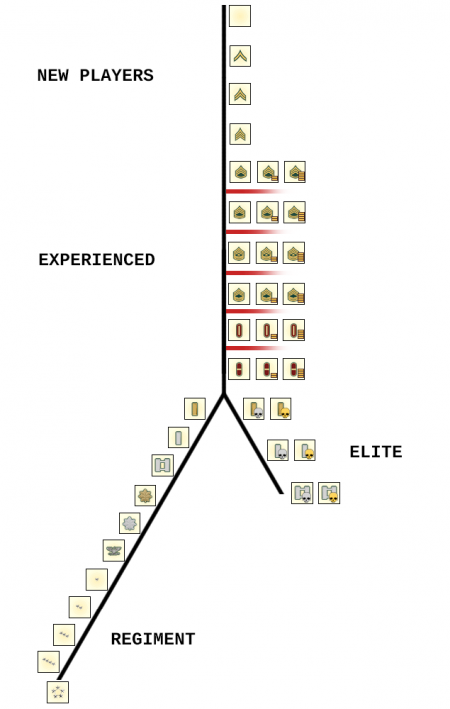 The leveling system essentially breaks down into four parts. The novice and experienced players, which eventually split between seasoned pros consisting of the lonewolf elite soldiers and the regiment officers. The method which we use to calculate the promotion points will differ according to each tier of players. This is to keep the system malleable for the broad spectrum of player types and challenge them as much as possible.

Along side this vertical leveling, there is also a horizontal leveling for players outside of a regiment. This is where reputation comes in. A scoring feature is given to players at the end of the match, to rate players in your team according to how well they performed strategically. This is to reward players who have affinity for being a commander. Not only rewarding players who are focused in the strategic aspect, but at the same time streamline recruitment into regiments.

Experienced Players
The experienced players, will be able to gain promotion points by performing spectacular kills or through great teamplay. Within the experienced tier of ranks there are some extra requirements for leveling up, such as improving your average score per game above the threshold placed. These extra requirements are intended to challenge players in performing better to level up, rather than simply playing the game. This also means rank will still, to a large extent, be a reflection of the skill of the player and instead of the number of hours they have invested.

Elite Officers
The best of the experienced players can battle for the top ranks and become what we call ‘field officers’. There are limited slots for them, so it is possible for field officers to drop in rank if they cannot keep up with their competitors. The focus point of this system is to keep the end game competitive and interesting for the players who are not too keen on rising in the regiment rank.

Regiment Officers
Regiments are, of course, a central component to Call of Combat. This is why we, once again, tightly integrated them into the leveling system. We wish to give regiments full control over how they manage their officer ranks. Ranking within the regiment works differently and is not directly based on in-game performance. For those familiar with Call of Combat v1 this would feel familiar to how regiment ranks were organized before. Officer ranks are ordered according to how the regiment sees fit, but ranks are limited by the regiment size. A player can not be promoted to officer, unless they meet the basic criteria with regard to rank and experience.