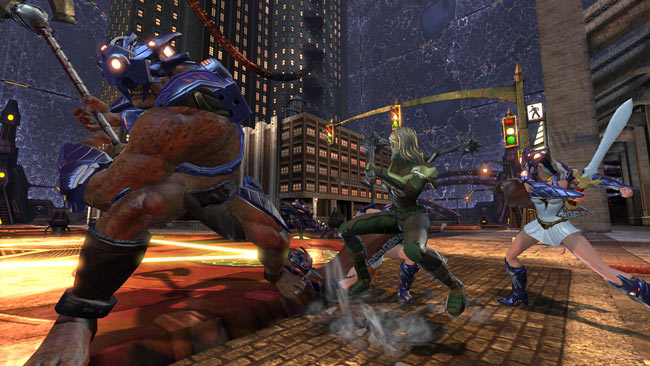 The upcoming year should be a big one for DCUO. Their first DLC planned for 2015 is: Amazon Fury Part II. The epic storyline continues, major mysteries are uncovered, and a war with the gods has begun.

In Part I of the trilogy players experienced the events surrounding an Amazon Civil War, which resulted in a full scale invasion of the mortal world. Hippolyta launched her attack on Gotham City to avenge Brainiac’s intrusion on Paradise Island and to cleanse the city of his corrupting influence. Wonder Woman desperately tried to intervene and stop her mother’s madness, and Circe flocked to the side of the Amazon Queen to resist Hippolyta’s rebellious daughter. But, despite Wonder Woman’s heroic efforts, war broke out among the Amazons and the death toll still rises.

In Amazon Fury Part II, we see the next chapter in this story that is deeply tied to the events in Battle for Earth and Origin Crisis. Now, we realize there is a connection between the Greek Underworld and even Olympus itself. So much is at stake, and it will all rest on the shoulders of the players to help their iconic ally achieve victory. Will the Amazon Civil War rage on in the streets of Gotham City? Will Brainiac finally take control of the Nexus of Reality? Will we learn why Hippolyta is so hell bent on invading Gotham City? The answer to all of these is…YES!