The long awaited MapleStory balance patch has been revealed just a month ago and is nearing release. With three (3) days left to go, the update will officially go live on Tuesday, December 7th. Within the patch, players will finally be introduced to many graphical improvements including the wide-screen resolution everyone has wanted since day 1. Furthermore, Nexon has completely rebalanced the games monsters, classes, maps, and of course skills. The UI has also been reworked for simpler and easier navigation. One of most awaited features however is the revamped level experience curve. Leveling can now be termed as entertaining and enjoyable rather than boring. Although players will still face a challenge to level, the reduction of experience has been calculated to be five faster (5x) from levels one through seventy than what it was originally and nearly halved from level 121 to 200.

GDT (Global Development Team): The first thing most Maplers will notice is that the existing content has been changed and rebalanced significantly. Some of unnecessary and inconvenient game systems have been removed to streamline the Maple experience. We’ve removed insignificant or infrequently used class skills and replaced them with skills better suited for the way that class has actually evolved. Some of the original skills have been rebalanced, which should resolve many of the overpower issues brought up by the community.
Players can expect a really different playing experience from what they have grown used to. We hope our global players are looking forward to Big Bang as much as we look forward to bringing it to them!

You can find more about the revamp of skills and other here. So what’s your choice, Cataclysm or Big Bang on the 7th of December? Better choose soon! 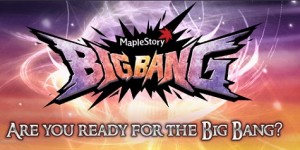